You are here: Home » Buying and Selling Property Checklists » What do the property pundits from Savills, Capital Economics and Kate Faulkner say about the housing market for 2017?

What do the property pundits from Savills, Capital Economics and Kate Faulkner say about the housing market for 2017?

What can we expect from the property market in 2017? 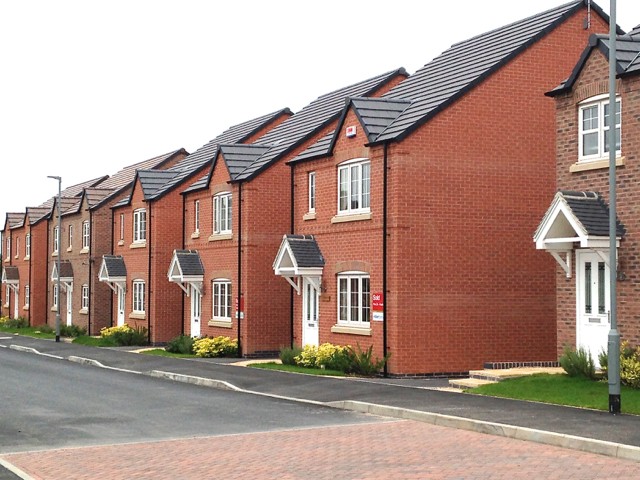 To predict what might happen in a national or local property market, the first thing to understand is what’s likely to happen to the economy. This dictates how much money people have access to, either to buy property with cash or with a mortgage. Secondly it also tells us whether the news will report doom and gloom or a rosy picture economically – the happier they are are with the economic success of the UK, the more likely property prices will rise as consumer confidence is such a big driver in this market. If they are pessimistic, then the market could quite easily take a downturn.

The summaries of the economic views for 2017 in the UK are:

Savills – “Brexit vote makes forecasting more perilous than usual… But in terms of its impact, it’s not comparable to the events of the late summer of 2007.” They do believe though that “Households will face weaker income growth and there may be some job losses over the next two years”.

Knight Frank - “Just because the worst of the original Brexit predictions for the economy haven’t transpiredm it doesn’t mean the property market is guaranteed a smooth ride. House purchases are a big commitment and, even if the wider economy holds up, the property market can still underperform.”

Countrywide – “Overall the outlook for both house price growth and transaction levels over the next two years is weaker than before the UK’s vote to leave the EU. But there is significant uncertainty about how the negotiations will progress and thus on overall confidence in the economic performance of the UK and its housing markets.”

In summary, most think that 2017 will be see a bit of a slowdown economically; you can access all the economic indicator forecasts here.

How are these economic influencers likely to impact on the property market overall?
As far as Capital Economics are concerned, they believe low interest rates will “support the property values”, albeit at a lower level, during 2017 while then getting back to near 5% growth in 2018.

The CEBR are a little more pessimistic and believe “London property prices are set to fall” by up to 5.7%, while the rest of the market will see a bit of growth: 2.6% during the year.

Below are the price forecasts from the property pundits Savills, Knight Frank and Countrywide:

What is interesting about these predictions is that they are low versus previous housing market performance.

From our data using the government UK HPI the chart below shows the average annual increase in the UK and the regions since 2000. On average, prices have risen over the last 16 years by 6.3% each year in the North East to 8.6% annually in London. 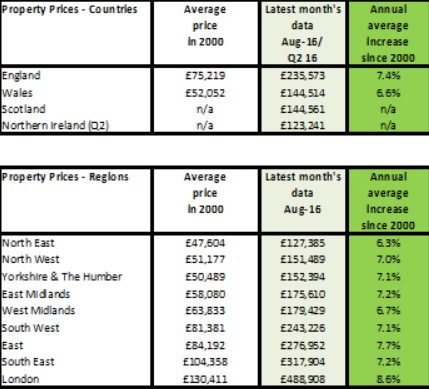 Over the next five years the North East is predicted to grow from 9 to 13% overall; while even London is only expected to see 11-19% growth.

This indicates that – perhaps due to affordability issues and the fact that property prices up to the credit crunch rose much faster than incomes, coupled with mortgage rates being so low now – incomes are finally starting to hold back property prices.

What's going to happen in your market? Learn how to analyse it here.

Myths of the housing market – it’s time to stop misleading people
Lots of the media and other organisations continue to talk about what I consider seriously old ‘myths’ in the housing market. There are few places and properties that ‘double every 10 years’ which the property investment community like to tell everyone and the idea that property prices are ‘sky rocketing’ is severely restricted to economically successful areas such as London and Cambridge – but even in these areas and many others around the country, there are properties that aren’t growing at the rates suggested.

In addition, telling first-time buyers they have to put down tens of thousands of pounds for a deposit is, in the main, a myth, too. What is often quoted is the average deposit first-time buyers ARE putting down – which is currently around three times the level they NEED to put down, which is 5%.

Misreporting the property market ends up distorting what happens. If you tell lots of 20-somethings they have no chance of getting on the ladder and quote distorted stats, then they don’t bother to save and don’t bother even to look.

In my view, this is irresponsbile. We all have a duty in the property market to report accurately how people can, cost effectively, put a roof over their head. It’s a prime need along with the NHS, security, being able to afford to eat and securing a good education. Constantly telling people ‘you haven’t got a chance’ is not correct and not what they need to hear if there are ways of achieving home ownership and legally let and safe properties from good landlords and agents.

What happens to the number of sales is almost more important than prices!
We spend so much time banging on about prices that we often forget the driver of prices up and down is really the number of buyers and sellers and stock availability. Know this and then you know which way prices will move.

Savills have provided some pretty in-depth analysis on transactions – and which buyers will purchase. What this shows is that transactions are expected to fall in 2017, mainly due to the loss of the buy-to-let investor as well as cash buyers. 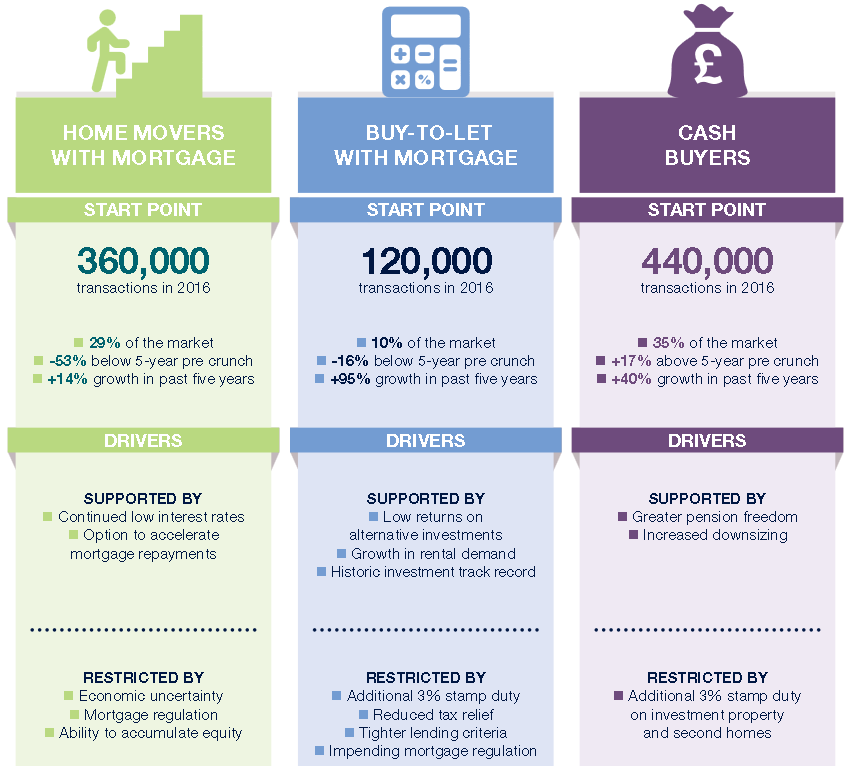 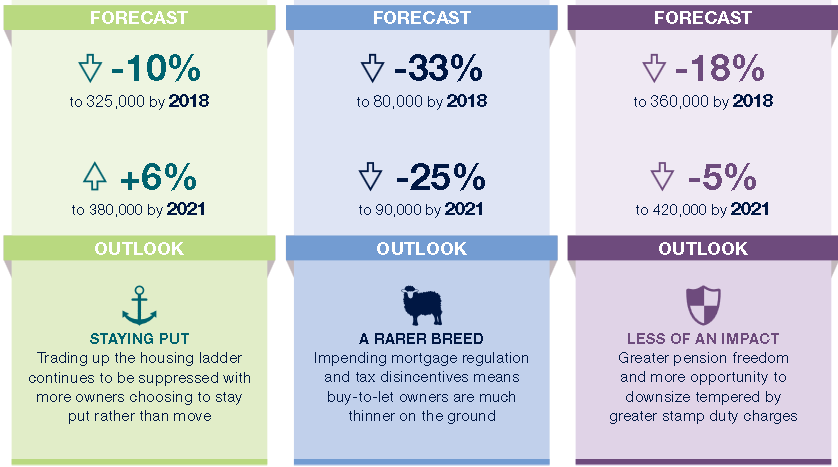 A shortage of homes is expected to continue
Every year there will be pundits saying the housing market is overvalued and that prices will come crashing down. The problem is though, from a volume perspective (from Savills and many others), we should be building 300,000 homes a year to house our existing and new population but are actually only managing around 171,000 to March 2015. This means each year we are producing a deficit in housing numbers of 129,000 homes.

If the economy continues to do well, properties both for rent and purchase will continued to be effectively ‘auctioned’ to the highest bidder, either driving them up or remaining stable, or seeing small falls.

It’s difficult to see how, under these circumstances, property prices can fall by much in the future, especially when more than 50% own outright and don’t have to sell if they don’t want to and can’t achieve the price they want.

What do these property forecasts mean for you in 2017?
Below I’ve highlighted what I think individuals in the property market need to consider based on the thoughts above.

Data distortion warning:
What I would warn against is listening to/reading the analysis of the property market from March 2017 onwards. This is going to be horrendously distorted due to the huge number of transactions in March 2016 forced by the change in stamp duty for second homes, then the market wobble we had in the summer of 2016 due to the Brexit vote.

So I’m afraid much of the analysis will be flawed – but no doubt it will be used to create some scary headlines!

I don’t tend report on the prime property markets as these are so well covered by the likes of Savills and Knight Frank, so do go through to their reports.

First-time buyers
As long as you concentrate on the market you are buying in and get to know what’s happening to, for example, two-bed terraces or one-bed flats in YOUR area, then 2017 might be a ‘nice’ year to buy. Yes, there may be lots of negative reports around but, at the end of the day, you are buying into the property market for the rest of your life, as long as you can:

1. Afford the property now and if interest rates go back to the 6-7% they were (and the lender/broker should assess you on this);

2. Protect yourself against life events such as death/sickness, loss of job, divorce and debt.

Buying when you are ready and it suits your financial circumstances is more about your decision of when to start putting a more permanent roof above your head than renting or staying at home with mum and dad.

Just so you can see a ‘worst-case scenario’ here’s what has happened ‘on average’ to house prices since the credit crunch – one of the worst falls in house prices we’ve seen over the years and some areas are still to recover (on average) 10 years on.

Looking to buy for the first time? Read our quick guide. 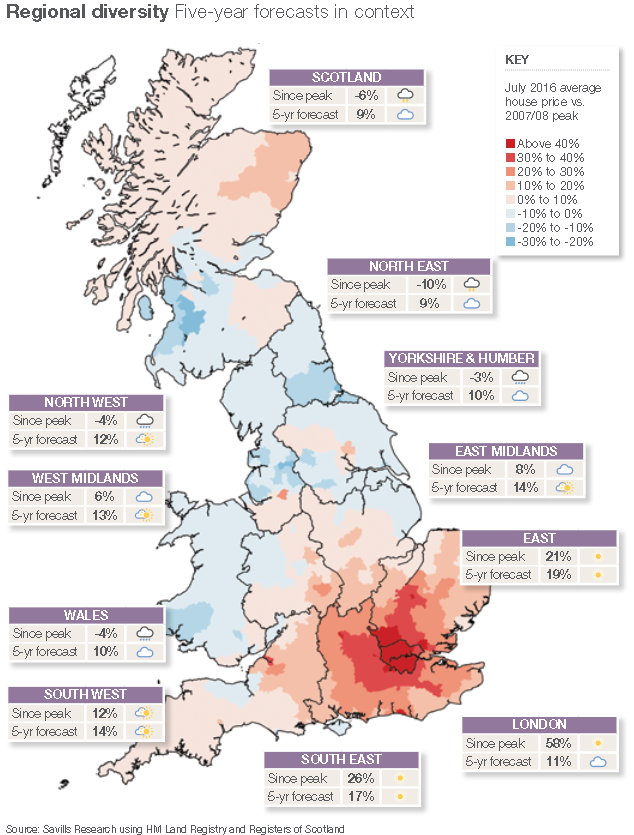 Trading up
If you are looking at buying and selling while moving up the ladder, typically what’s happening in the market has less impact. If prices are going up in general, then you sell the home you have, you earn more money and buy a bigger one which you pay more for and vice versa. Either way you have ‘skin in the game’.

The only thing to be aware of for 2017 is that if there is a ‘downturn’ in the market due to some doom and gloom, then it may take longer to sell your home, so be prepared and price sensibly, possibly looking to sell sooner rather than later in the year.

Having said that, individual markets are now so different, you could find the property you are selling is falling in value and tough to sell, but the one you want to buy is rising in price and people are clamouring to secure it, making ‘silly offers’. So make sure you know both markets – where you are buying and selling – so you are ready for the move, or considering selling yours first, moving into rental or buying new so it’s not quite as stressful.

Trading down
Unless you bought at the height of the property market in 2007 and are struggling to see your house price recover to those levels, if you are trading down, you just need to know what the markets you are operating in are like.

But my honest view is that you shouldn’t worry too much, just make sure you have the right property for you, especially if you are in your latter years and are able to release some equity. If you are moving to a different area, sell and rent first to avoid an expensive mistake of buying somewhere you have to move out of again in a few years.

Investing
It’s potentially a good year for investors in 2017. In some areas there will be chance for a bargain as demand drops off, but this has to be put alongside the fact your portfolio might fall a little in value.

Basically, do your homework and see an independent financial advisor, mortgage broker and tax advisor to ensure you really understand the impact of adding to or continuing to drive your wealth through property.

What’s the market like for renters?
This will be interesting for 2017 as at the moment we don’t really know!

In reality, if rents follow previous patterns, they should be pretty flat in 2017 – in line with incomes. However, many are predicting rises due to the increase in costs to let a property (with the loss of tax relief and increased safety costs).

Further useful notes from the forecasts: