Every report is currently talking about a market recovery. However, some reports are over estimating the market success we are seeing. What we are seeing is London recovering to its normal rates of property price growth, no unsustainable bubble – much as it looks good in a press headline. Let’s face it, people have had six years to save, many seeing no London house price growth at all during this time, so it’s no wonder 20+ people are queuing to view properties to buy, the pent up demand in the Capital is huge. The good news is, other regional markets are now seeing property sales move to a more ‘normalised’ market – having seen sales numbers for first time buyers, people trading up and down or investing, halve in numbers during six credit crunch years. What regional markets will be keen to see next, is increased prices too, but whether this will be available for all properties in every market, will remain to be seen.

How do December’s/January’s prices compare over time?
This month’s figures suggest:-

How do this month’s prices compare to the rest of the year in England and Wales?

For 2013, we can see from the chart that the average price trend is now moving upwards. 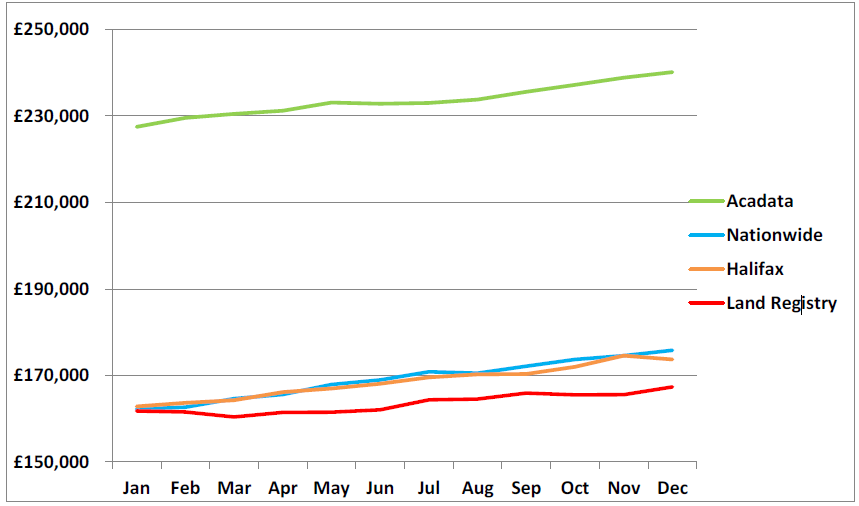 How do this month’s property prices compare to the lows of 2009?
Although in the main, property prices haven’t recovered to the heights of 2007/8, compared to 2009 lows, property prices are recovering quite strongly – especially for mortgaged properties through Nationwide:-

For FREE, independent and up to date advice on Buying, Selling or Renting a Property, sign up for FREE to Property Checklists. Join now to access our FREE property checklists, including:-