You are here: Home » Tenant and Landlord Property Checklists » Is the Conservative government anti landlord and agent or just anti the Private Rented Sector altogether?

Is the Conservative government anti landlord and agent or just anti the Private Rented Sector altogether?

Is the Conservative government anti landlord and agent or just anti the Private Rented Sector altogether?

It’s a sad time for agents, landlords and unsuspecting tenants in the PRS as we head into Christmas.

From my perspective, most of the problems that exist in the Private Rented Sector (PRS) are down to appalling government policies (of all colours!) since the late 1980s.

The biggest problem in the PRS is a lack of stock, the next biggest problem is successive governments flatly refusing to regulate letting agents in England (they are now under a type of regulation in Wales and will be in Scotland from 2018) and the final problem is introducing laws with hundreds of rules and regulations which are not:

As stated earlier, it isn’t a particular government to blame, this is a combination of all parties – whether in power or not.

Looking to rent? Work with the good guys! Read our how to rent quick guide.

The people that aren’t to blame in this sector who appear to be taking the brunt of the unwarranted attack are:

New to landlording? Want to do buy to let successfully in the new investment environment? Here's our expert quick guide.

What’s the latest on rents now and what are the predictions for 2017?

Here is the current and past 12 months rental changes:-

LSL are showing the biggest rental rises year on year with 11.7% increase; Countrywide show 4.8%. Belvoir’s inflation tends to be different to others as it measures rent increases for offices which have traded consistently over time, as opposed to measuring rents from a varying office base which can be increasing/decreasing.

Overall, rents are pretty flat to rising just above wages, on average.

But the national picture hides a lot going on at a regional level:-

As you can see this is a summary of the indices which are all produced differently so not comparable, but the ONS data is pretty comprehensive, so that's a good guide of rental inflation in your region.

In summary, regional variations are starting to dissipate, especially shown by the ONS index where they are measuring rental changes from 0.2% fall in Scotland through to a 3.4% rise in the South East.

Overall, from their index, rents are rising either at a similar rate to wages, or less, so good news from a tenant’s perspective. Individual rental indices from LSL and Homelet are showing similar changes to those from Belvoir offices while, in the main, Homelet and LSL measures suggest that rental inflation is running slightly higher in areas such as the South East and West Midlands.

What are the forecasters predicting?

This are the key forecasts over the next five years from Knight Frank, Savills and the ARLA / CEBR. Bearing in mind inflation normally increases at 3% per year, these rises are around, or just above inflation and certainly not predicted to 'spiral out of control' as many accuse rental inflation of. 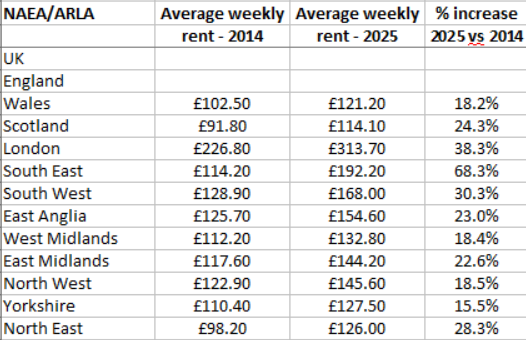 So that's what the forecasters think but what's your opinion? Do let me know.